So after our adventure at the aquarium we decided it was time to double down and take them swimming the next day. Our newest phrase was fast becoming, “what could go wrong?”.

As we were starting to feel we were getting a hang of the breakfast routine (and even felt we knew the right angle to brush their teeth now without completely jabbing at their gums), we arrived and immediately got into the swing. The breakfast was eaten, my tea was drunk and we sat to discuss the plan for the swimming. We were told both kids were unable to swim, but loved splashing around in the water, so we would need swimming aids, as well maintaining a very close eye on them. I was then introduced to a swim nappy. Yes, they have these things. They are like nappies but are designed for swimming ( ok  you may be saying no s*it Sherlock at this point).  They are something to do with water retention, but as long as they stopped ‘caddy shack’* moments, I was happy (*Old person reference).

MY TIP – If going swimming ask the stupid questions. It may be obvious but true….Taking and being responsible for your own kids that age is a very different proposition to just going and doing lengths. 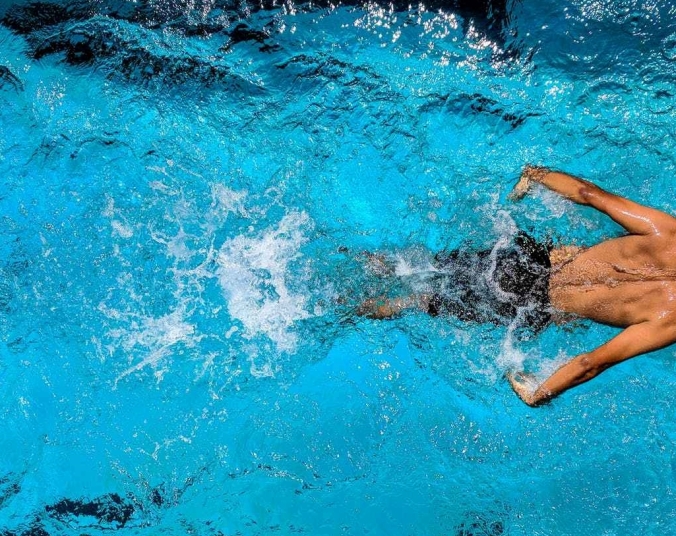 So after a leisurely breakfast, one nappy change (S’s turn – yeah) we were off to the swimming pool, 2 excited kids, some arm bands and 2 very nervous new parents.

The pool was not too far away, so our journey was quick, which was a little bonus. Less time to worry about drowning kids, hitting heads on the bottom as well are sharks in the water (ok, maybe the last one was less likely, but I am not sure I will ever get over watching jaws when young lol). Oh and less hearing ‘The Gruffalo’ on repeat …third day running.. btw.. you will even get used to this and happily  do the voices too!

We got to the pool around 10am and headed off for tickets. We felt like experts now and had no stress getting tickets for the whole family (it helps you go in school time, as there was no Q).

We then headed down to get changed. We had been told it was one of those places that has large shared changing room with separate cubicles and even family cubicles  – designed especially for us (VIP all the way) so we went off searching for one. This is not as easy as it seems, as you have 2 kids desperate to stay with you and both hold your hand, while also getting over excited and wanting to get into the pool. You end up becoming a circus standard juggler, with kids on one hand, towels in the other, and bags in the last hand…..eeer is that right 🙂 . It was a case of divide and conquer again, as I dumped the kids, bags and everything else on S and scarpered to find the ‘Elusive’ family VIP area.

MT TIP – Try not to take everything on yourself – come up with a plan on how to ‘herd; the kids before hand…. or do SAS standard reconnaissance first 🙂

When I finally found it, I was a little disappointed as it was just a slightly larger cubicle than the rest, but I expect I may have been having slightly too high expectations as we are special, as we are parents in training. Time to find S and the kids. Hope they were all in the same place and not causing a riot (kids do that don’t they?)

Thankfully they were all still together and looking calm (Have I mentioned how much S rocks?).

So once we had bundled them all into the area, we had to start getting changed. S and I divided and conquered again, and took one child each to get ready. I had the little one (squigglier), and she had the older girl. Getting them ready was actually not too difficult as they still seemed to be compliant, but then……. we had to get changed ourselves. In essence we are getting changed in front of what is essentially 2 strange children. Getting changed in front of your children may sound normal for people with kids from birth, but for us, it was very awkward and we actually both felt very self conscious…especially given their head height if you see what I mean….. anyway, we tried to get changed quickly (they were now starting to bounce in excitement of swimming), while also half turning away and whilst still keeping an eye on the kids.

The moment got a little more awkward when the 2.5 year old decided it was very funny seeing us undressed and pointed and laughed. Oh the indignity! He has a particular liking for anything that ‘wobbles’….so we were both in trouble (time to do some sit ups!).

MY TIP – Don’t sweat it. The kids don’t really care, so why should you. Chin up and keep going 🙂

Finally we got into the pool. Luckily there was a small shallow kiddy pool we could use, so we headed into the…..(stop running!)… (splash), they were both in. Yes I had remembered to blow up the arm bands and put them on – no, I had not got one of them on properly and it fell off straight away, but we were close enough and it was shallow enough so no dramas (at least to anyone watching).

There then followed what I can only describe as a comical 45 mins of 2 adults crazily following, panicking, throwing, laughing and splashing after our kids. We took it in terns to look after each of our children, and the few times, we met in the middle of the pool we exchanged notes and / or kids. There was a lot of, watch me, watch me as they did something very minor to impress us. It was heart warming and a little heart breaking, as they were so desperate to impress us, but really did not know how to play that well. In the pool I made a mental note to help teach them to behave like kids…….:-(

Finally it was time to get out and re-dressed. This was a little more difficult as drying them takes more control. Additionally putting on socks and shoes onto slightly damp, forever moving feet, in a small cubical are now near the top of my list of frustrating things to do.

MY TIP – Put them in crocs or something without socks – make your life easier. Oh and never put them in tight jeans unless you want to be leaving the changing room at closing time.

Finally we were on our way home, to some much ended rest and another cup of tea.

Swimming had been a blast, and had actually broken down a lot of emotional barriers between us, so had to be classed as a good day…..(except the realisation we were going to be a 2.5 year olds favourite joke ever time we get naked  :-O)